6.25.4 Construction of a gas hub in Bulgaria

The concept for the establishment of a gas distribution centre (hub) on the territory of Bulgaria is based on the idea of significant natural gas quantities from various sources entering at certain real physical points for further transportation. At the same time, a gas trading point - hub is also being established, where each market participant carries out transactions in natural gas on a market-based principle.

The idea for the building of a regional gas centre is supported by the strategic geographical location of Bulgaria, the well-developed existing gas transmission and storage infrastructure and the interconnection projects with Turkey, Greece and Serbia, as well as the completion of the infrastructure with Romania.

The gas hub infrastructure will connect the natural gas markets of Bulgaria, Greece, Romania, Hungary, Serbia, Croatia, Slovenia, Austria, Germany, Italy, Ukraine, Moldova and others. As main sources of the hub, there are expectation for natural gas from Azerbaijan and other sources from the Southern Gas Corridor (through TAP and TANAP), Russian natural gas, local production from Bulgaria and Romania, natural gas from existing and under construction liquefied natural gas terminals in Greece and Turkey that will provide natural gas from the United States, Qatar, Algeria, Egypt, etc. The gas hub concept includes several key elements which together form the project:

Further information on the funding received, can be found on the website of the funding institution - Innovation and Networks Executive Agency (INEA).

Draft route options for gas infrastructure on the territory of the Republic of Bulgaria and summary of all sections drafted so far, were presented at the meeting.

According to the experts, Balkan 1 sets out as the preferred route option for the hub implementation, the realization of which is planned in two phases. The first phase provides for a new entry capacity from Turkey and a new exit capacity to Serbia, and the second phase - an entry point near Varna and a new exit capacity to Oryahovo. Greece and Turkey (existing and new infrastructure) are being considered as other entry points.

Map of the examined possible sources of gas and markets for the Balkan Gas hub: 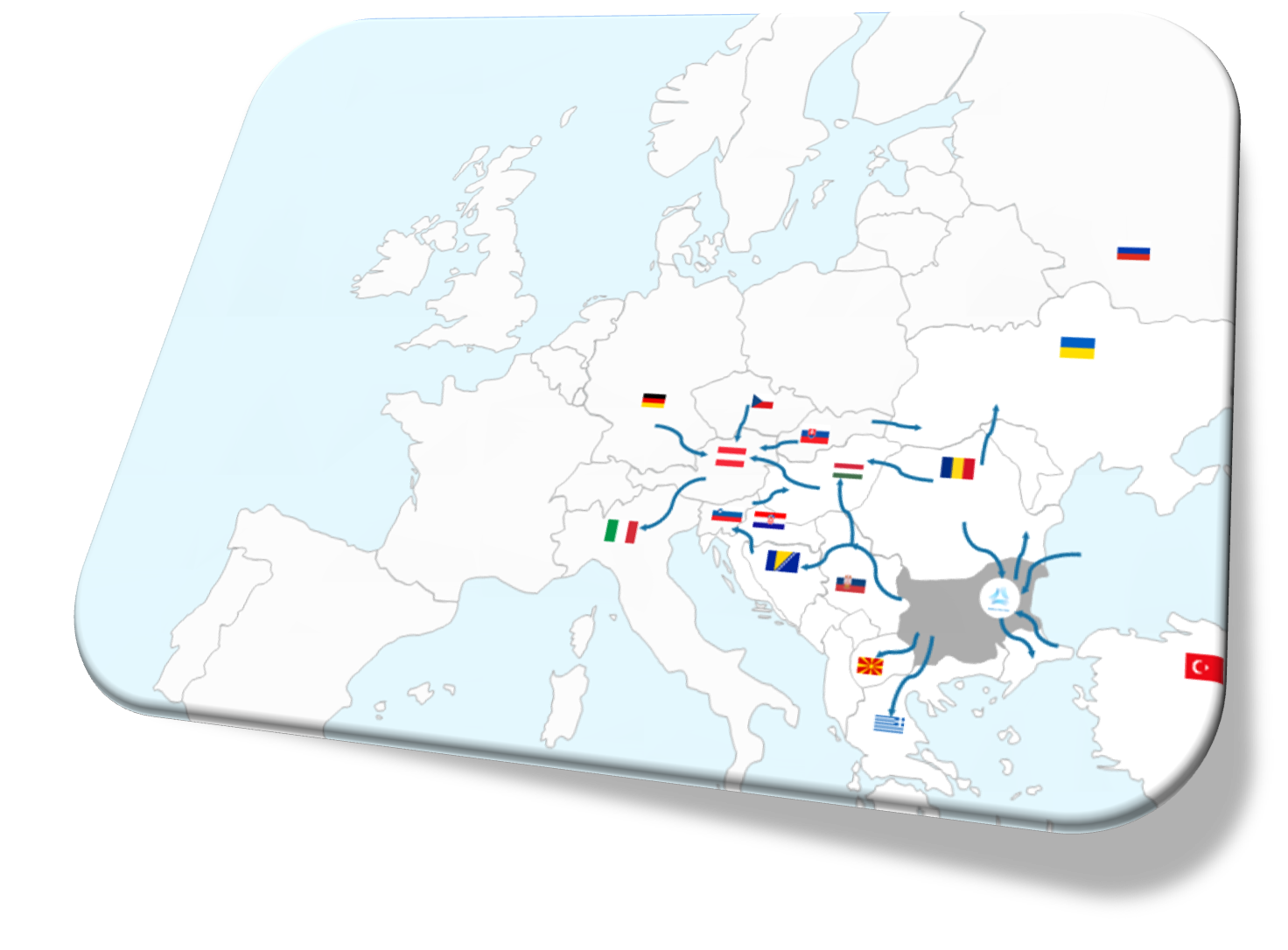 More information about the expert meeting can be found here.

More information about the Balkan Gas Hub Round Table, held from 01-03 September 2019, can be found here.

With a view to establishing a liquid market for natural gas trading in Bulgaria, pursuant to the decision adopted by the Council of Ministers and the National Assembly to amend and supplement the 2020 Energy Strategy of the Republic of Bulgaria and having regard to the realization of the concept for the establishment of a gas distribution centre on the territory of Bulgaria, on 18 January 2019 “Bulgartransgaz” EAD registered the subsidiary “Balkan Gas Hub” ЕAD.

Currently, 100% of the shares are owned by “Bulgartransgaz” EAD and at a later stage up to 49% of the shares will be made available to other natural persons and legal entities. The company will be operating trading platforms servicing the needs of the natural gas markets within the Balkan gas hub.

The first liquid physical and trading gas hub in the region of South East Europe - based in Bulgaria, will have the necessary prerequisites for its establishment in synergy with the physical infrastructure of the gas distribution centre.

Information on the Company's plans with regards to the implementation of the Balkan gas hub concept, related to construction of the necessary infrastructure (optimization of existing infrastructure, modernization and expansion of the existing network, construction of interconnections with neighbouring countries, etc.) can be found in Section 5 of the latest Ten-Year Network Development Plan of “Bulgartransgaz” EAD.

INFORMATION CONCERNING THE PUBLIC AND PLANNING OF PUBLIC DISCUSSIONS